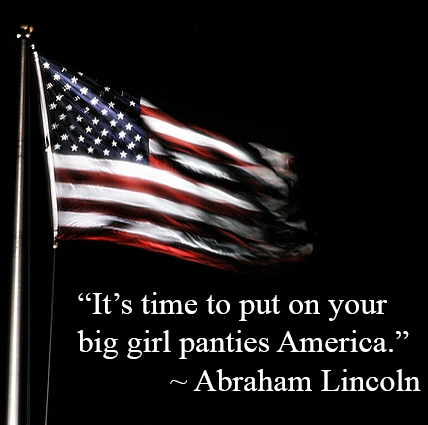 Time To Put On Your Big Girl Panties America

Happy Thursday all ya’ll beautiful people! I stayed offline yesterday and mostly today because the absolute hatred and rage from all sides, even the sad or fearful posts I saw inevitably had a hateful comment left. It was too much for me and my faith in humanity.

You know, sometimes I hate being right. I called it the minute he threw his hat in the ring. I shook my head in disbelief at the glee my fellow Democrats showed. Anytime I would vocalize my concern the response was loud and clear:

“What are you talking about? Him running is great for us! He’ll never get the nomination. He’ll get us mobilized to shut down his crazy” –Random Progressive

“He’s a marketer  – he knows brand and he’s pitching to a really disgruntled population.” –Me

Over the last 17 months, I said folks shouldn’t discount the people who he appealed to and his ability to rile up his “followers.”  It’s not like he needed to convince everyone to win the nomination; the Republican field was more crowded than a Tokyo subway.  He only needed a small, focused group to get his position on the ticket.

I know there exists a significant number of people in the US that feels slighted.  Feels the government works against them; that their voices aren’t being heard. And in a LOT of ways, I get it. I DO! At least when it comes to jobs, adequate healthcare, debt, etc. There was a time that I could have voted for many a Republican. Honestly, it was before I could vote, though; before God was brought in as a third party. I still lean a little toward moderate when it comes to the economy. However, as the social divide grew between us, I couldn’t support ANY of their ideas.

What Happened to Facts in this Election?

I CANNOT understand the denial of science or climate change. The refusal to equate alternative energy as good for jobs as well as the environment. The blatant ignorance of women’s health issues. The bigotry, sexism, compassionlessness, and complete unwillingness to understand social issues past, “I don’t agree with you, so YOU have to do it MY way.” Um, or YOU could just not do it THEIR way, just a thought.

At the core of me, I don’t understand fearing and hating someone for something they’re born with. Whether it be heritage, skin color, special needs, sex, sexual orientation, etc., etc., etc. They had no choice; you, however, have the choice of being an asshole. But that, and all the other detailed social discussions can be put off for another day. Am I scared shitless that America is going to go back to the 50’s? Yes, yes I am, but not all hope is lost.

The fact of the matter is, even though Republicans have a majority of both the house and senate, they need more than just a majority to pass controversial legislation. That means there is room for negotiation, and we shouldn’t look at the behavior of our elected officials for the last eight years as demonstrative of what’s to come. All sides used to work together toward common goals. The absolute refusal to bend or compromise is a reality relatively new to us, and I do think it’s possible to roll it back.

I think Democrats have already displayed a willingness to work with the other side. Who can unite us on Trump’s anti-trade deal? There is an entire population of anti-trade Bernie folks who possibly voted for Trump because of his anti-trade views. So, there may be common ground in our post-election Trumplandia situation. I’m excited about hearing that Trump and Bernie Sanders might work together to help the middle class. I think those two brains working together could come up with something brilliant. But I think they should be locked in a room with no outside influence until they come up with a plan… Shit, wouldn’t that be a great reality show? Big Brother: The Odd Couple! Bawhahahahahahahaha!

Healthcare is a Right

An example of how hope is not lost is how the rhetoric has changed when it comes to the Affordable Care Act. It’s no longer, “Get rid of it!” It’s now, “Repeal and Replace.” I think they are starting to get it; that we ALL need and deserve affordable health care. Perhaps they can recognize that a lot of the problems the ACA is having are from how the bill was perverted to appease everyone. Maybe they see that a healthy workforce is a strong workforce. And hopefully, not too, too many Congress members or Senators are on Big Pharma’s payroll to fuck it all up. I suggest we all pay close attention to how this goes down since for many people it is truly a life and death matter. Let’s care about that, okay? If it looks like THEY are going to fuck it up worse than it is now, get active. Call your representatives’ every day telling them what would happen if their plan goes through. Plaster their Facebook pages with picture of your kids and meetings where you are actively planning how to get them to lose their seat if they don’t listen.

A lot of our fears are issues that will need to be decided by the Supreme Court. Yes, there is a seat open, but they’d need at least two votes. And yes, three left swinging judges are old, but not a single one of them has said they were going to retire yet. Even notorious Ruth Bader Ginsburg had something to say, adorned in her infamous dissent collar after the President Elect was announced, she vowed to stay until she is kicked off the court by a doctor.

For fucks sake, unless you are Native American you are part immigrant. Are you really going to break up families to deport members that positively contribute to our society? If yes, what the fuck is wrong with you? I just don’t even know what else to say. Is it even fiscally possible for some mass round up and ship out to happen? No. Do I think if YOU step out of line that WE won’t fight back? Nope, I have more faith in humanity than that.

Am I scared for pretty much everyone that isn’t an old white guy? Yep. If you see some asshole being a douchebag to someone that looks different from them are you going to speak up? Well, you better, because if not, you are part of the problem. 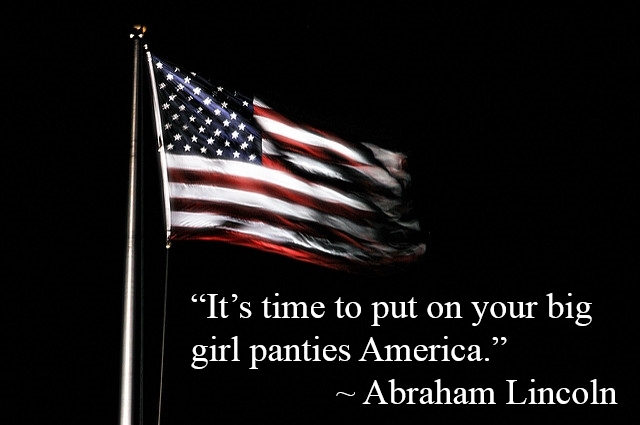 I think across the board there CAN be positive change. If our elected officials were smart, they’d all being willing to work together and compromise if necessary to bring change that benefits everyone. Everyone just needs to do their fucking jobs, work together, and get shit done. But we can’t get anything done if we are too busy being assholes to each other. If we never stop to listen, we will never learn.

So put on your big girl panties America, it’s time to get shit done.